US Open campaign in doubt? Russian tennis star Daniil Medvedev believed to have been in contact with COVID-19-infected player 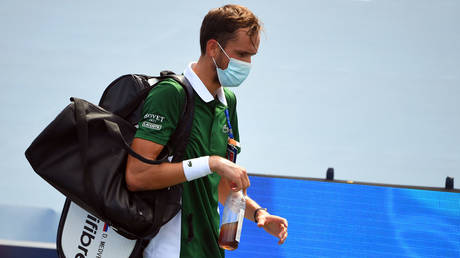 Russian tennis ace Daniil Medvedev is believed to have been in contact with French player Benoit Paire who tested positive for COVID-19 less than 24 hours before the start of the US Open in New York.

The odd twist of circumstances has put Medvedev’s US Open prospects in doubt and threaten to undermine the entire tournament as Paire’s contacts list involves more than 30 people inside the US Open bubble.

READ MORE: 'Where are the women?' Tennis No. 1 Novak Djokovic SLAMMED for 'TONE DEAF' men-only union as Nadal and Federer SHUN idea

Paire will be isolated in his hotel room for 10 days with security staff staying outside to make sure he doesn’t get out.

Several players who were in contact with Paire, including Adrian Mannarino, Gregoire Barrere and Richard Gasquet are prohibited from attending public gatherings inside the bubble and are allowed to train alone only with their coaches.

According to L’Equipe, Benoit Paire has tested positive for coronavirus and is out of the US Open... https://t.co/LkwDsFxodY

According to the Open Court, Paire played cards together with Kristina Mladenovic and her coach and held a practice session together with Medvedev before getting his test results.

In the wake of Paire’s news Mladenovic has been prohibited from using public transport along with receiving movement restrictions. No information regarding Medvedev’s status has been revealed so far.

Third seed Medvedev is drawn to open his Grand Slam campaign against Federico Delbonis of Argentina. Last year he reached the US Open final where he lost to Spanish tennis icon Rafael Nadal in a five-set thriller.