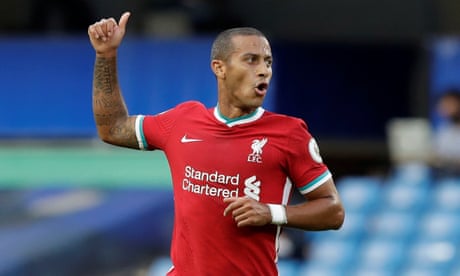 Now back from injury, the midfielder could reignite his club’s title defence, starting against Manchester United on Sunday

For an indication of how important Thiago Alcântara was to Bayern Munich, it is worth going back to the team’s last training session before last season’s Champions League final. On a warm Saturday evening at the Estádio da Luz in Lisbon, and just before the session started, Hansi Flick could be seen speaking with Thiago for a solid two minutes. The conversation appeared to be about passing strategies and made for compelling viewing given its intensity, seen most strikingly in the moment the head coach shoulder-checked the midfielder. It was also unique – no other Bayern player, at that most crucial of stages, received the same attention.

Faith, trust, reliance – it was all there, and Thiago did not let Flick down. He was superb against Paris Saint-Germain the following day, delivering the most passes of any player on either side (85), not to mention the highest number of successful passes (88%), the highest number of accurate long balls (10) and the joint-highest number of chances created (two). He was arguably Bayern’s best player in inarguably their biggest game of the season and then, with victory and the treble secured, he was gone.