‘They still bombard me’: Russian skating queen Sotnikova says she gets death threats from Korean fans outraged by Olympic win 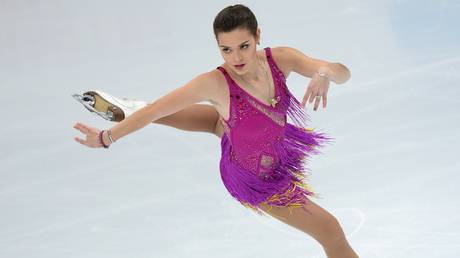 Russia’s first ever Olympic champion in women’s figure skating, Adelina Sotnikova, says she continues to receive death threats from South Korean fans who were not happy with her sensational triumph in Sochi.

The 24-year-old, who retired from professional sports last year, said that even seven years after her Olympic victory, South Korean fans still send her angry messages on social media wishing she would die.

“I was enormously worried when I faced hatred from Korean fans right after the Sochi Olympics. They couldn’t forgive me for my win over their star Yuna Kim. My Instagram was flooded with direct messages and comments with obscenities and swearing. They were in English in general, but sometimes they wrote me in Russian with the help of Google Translate,” Sotnikova said.

“Even now, seven years after my win, some fans can’t calm down and continue to bombard me. They can swear at me, send death threats or wish me some other ‘pleasant things.’ I don’t pay attention to them. Why should I spend my nerves on haters and trolls? I just block and delete them.”

The reason for the rage and hatred was Sotnikova’s shocking win over South Korean ice queen Yuna Kim, who was widely regarded as the pre-tournament favorite to win the Olympic crown in Sochi.

Leading after the short program, the defending Olympic champion from South Korea was expected to seal her victory after she delivered a nearly flawless performance in the free program.

Anyways stream Yuna Kim adios nonino in sochi and don't hate on Sotnikova because it wasn't her faultpic.twitter.com/sqRL2KjUTJ

South Korean fans were ready to celebrate what they believed to be a well-deserved victory for their idol, but their mood changed after they saw Sotnikova’s score on the board.

The Russian star sensationally won the event, and her Korean rival had to settle for silver.

Sotnikova’s victory infuriated South Korean fans, who claimed she had benefited from home-ice advantage with judges giving her higher sores than she deserved.

The skater’s victory was widely discussed in Russia and abroad, but neither South Korea’s figure skating federation nor Yuna Kim herself have ever disputed the results.