That's why they call him 'The Demolition Man': Alistair Overeem SMASHES Augusto Sakai with elbows at UFC Vegas 9 (VIDEO) 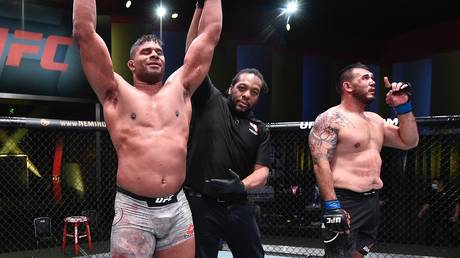 Overeem may be 40 years of age, but the big Dutchman showed he is still very much a factor in the UFC's heavyweight division as he halted the growing momentum of Brazilian Sakai, who had won all of his fights in the UFC before Saturday night's clash at the UFC Apex.

But Overeem stayed composed as he soaked up the punishment dished out by Sakai in the early rounds, then turned the table to finish the Brazilian with a vicious salvo of elbows and leave him a bloody mess after a fifth-round stoppage.

Remarkably for a man with such a long career, only five of Overeem's 47 career wins have come via decision. He boasts a stunning 25 knockouts and 17 submissions in a career that has spanned 21 years.

During that career, Overeem has captured MMA world titles for Strikeforce and DREAM, and also claimed arguably the biggest title of his career when he entered the K-1 kickboxing World Grand Prix and defeated the best kickboxers on the planet to win the K-1 Grand Prix title.

But the one prize that has so far eluded "The Demolition Man" is the UFC heavyweight title. He was knocked out by Stipe Miocic in his one and only title tilt so far, back at UFC 203 in September 2016, but his up-and-down form has prevented him from forcing himself back into a top contender spot again.

However, his victory over Sakai means he's won four of his last five, all by TKO finish, and he said he'd love to rematch the man who handed him his last defeat, Jairzinho Rozenstruik, who knocked him out with four seconds left of a fight that Overeem appeared to be winning.

"Rozenstruik, I destroyed that man," Overeem told reporters backstage after his win.

"I schooled him. In my opinion, it was a very bad decision by the ref, waiving it off with zero seconds left. I have no problem running that back. In my mind, I already beat him.

"It's only on paper that he got it. He knows it, too. I have no problem running that back."