'Sometimes I'd get that twinkle': Mike Tyson tells Joe Rogan fighting is 'ORGASMIC' ahead of ring return 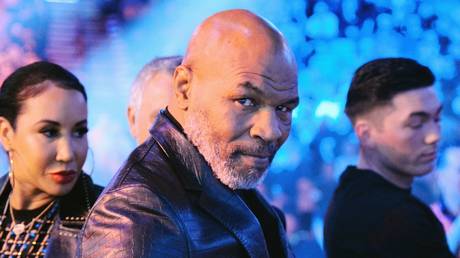 Former heavyweight champion of the world Mike Tyson said he enjoyed boxing so much it even left him sexually aroused during fights earlier in his fighting career.

The former champ, now 54, is looking to make a return to the ring to face former boxing legend Roy Jones Jr. for charity later this year, and the man formerly known as "The Baddest Man on the Planet" said that he actually derived sexual pleasure from competing in the ring.

Speaking to Joe Rogan on the UFC analyst's hugely popular podcast, "The Joe Rogan Experience," Tyson explained that he sometimes found it difficult to countenance the prospect of physically hurting someone in a fight, but then also revealed that he experienced an unusual sensation when fighting.

"It's orgasmic sometimes," he said.

"What does it mean when fighting gets you erect? Well, that's how I'd get when I was a kid. Sometimes I'd get the twinkle."

It's been a decade and a half since Tyson last stepped through the ropes to compete, when he lost to Kevin McBride in Washington back in 2015.

That fight saw him lose his third fight in his last four outings as he was defeated by Lennox Lewis, Danny Williams, then McBride in a four fight run that saw him earn just one win, over Clifford Etienne.

Overall, Tyson boasts a record of 50 wins, 6 losses, with 44 victories coming via knockout.

He has been sharing videos of his training with Brazilian MMA coach Master Rafael Cordeiro as clips of him smashing the pads have gone viral in recent months.

Now he's set to face Jones Jr. on Nov. 28 in an eight-round pay-per-view clash that he hopes will raise money for charity.

Some have questioned Tyson's decision to make a comeback, but the man himself said that he's fighting for others, rather than himself.

"I believe this is just going to be the beginning, and whatever happens, happens in life," he said.

"I’m just interested in fighting for the title of giving.

"It feels soul-cleaning for some reason. Doing it for myself doesn’t do it for me no more."