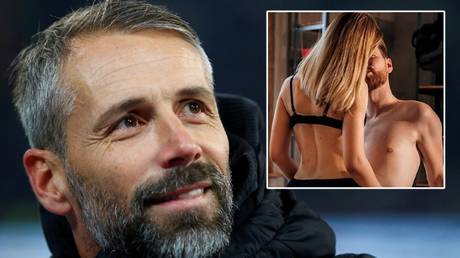 A dating and fetish site has asked a selection of members from its community of millions to name the sexiest coach in the German Bundesliga, revealing the voracious sexual appetite of the majority of fans at some top-flight clubs.

The former defender's "successful and personable appearance" saw him come top of the pile with more than a quarter of the vote, knocking Julian Nagelsmann, the 33-year-old RB Leipzig manager known for his suave suits during his club's charge to the Champions League semifinals, into second spot.

"I'm still fighting for first place," Nagelsmann had told the platform after he took over at Leipzig at the start of last season, responding to a question about his chances of succeeding axed Bayern Munich boss Niko Kovac as the sexiest coach in the league, having finished second to the Croatian last year.

Kovac would have easily won had he stayed pic.twitter.com/vQKQpQjBt4

"I'll give Niko a call and ask what I need to improve."

"Is the way now clear for Nagelsmann to bring the first title in the history of the club to Leipzig? I think so. Julian, you are the most beautiful here, but Marco is a thousand times more beautiful than you."

Elsewhere on the list, Bundesliga and Champions League winner Hansi Flick was unable to convert his on-pitch glories into popularity with adult audiences.

#2 is shocking. Great coach but looks like a baby shark

"Can we please stop turning men into sex objects?"

Eh, they need to invent some contests to take away the first place from Bayern 😂😂😂😂

Flick finished fifth as one of two new entries to the poll alongside Hertha BSC boss Bruno Labbadia, whose looks may owe something to his Italian ancestry despite his decision to take up German citizenship as an 18-year-old in the mid-1980s.

Werder Bremen coach Florian Kohfeldt and Eintracht Frankfurt's Adi Hutter made up the entries in a survey that also discovered how fans of Hoffenheim led the way when it came to sex, demonstrated by 84 percent of the club's fans admitting to sessions "every day or at least regularly."

Rose eclipsed his own fans, only 77 percent of whom were as active as their Hoffenheim rivals, beating Mainz supporters by little more than half a percent.

Mainz fans were said to be the most monogamous and adopt a "dirty and wild" attitude in the bedroom, compared to the "loving and tender" approach of the Hoffenheim contingent and the “routine and goal-oriented” moves of Werder lovers.

"The fans seem to show more loyalty to their football clubs than their partners," added Binternagel.