Saracens planning for quarter-final against Leinster without Owen Farrell 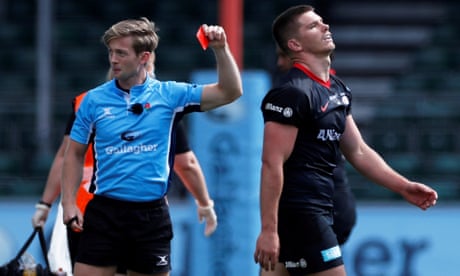 Saracens are resigned to losing Owen Farrell for their European Champions Cup quarter-final against Leinster this month after the England captain’s red card against Wasps last weekend.

The Saracens director of rugby, Mark McCall, revealed on Monday that he had spoken to an “incredibly regretful” Farrell but not specifically addressed his often-criticised tackling technique, pointing to his “pretty good” disciplinary record when asked if the fly-half needed to improve that area of his game.