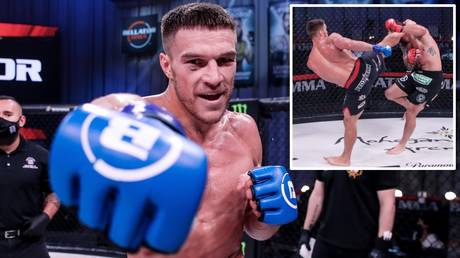 The 28-year-old from Stary Oskol has been perfect inside the Bellator cage since joining the US promotion in 2017, and produced a string of impressive performances to earn himself a shot at championship gold.

He defeated Philipe Lins by first-round knockout on his Bellator debut back in August 2017, then stopped former light heavyweight champion Liam McGeary with brutal leg kicks at Bellator 194 in February 2018.

That win earned him a shot against another former 205-pound champion, Phil "Mr. Wonderful" Davis, and he edged past the decorated former collegiate wrestling star via split decision.

He was then handed a bout against former Bellator middleweight champion Rafael Carvalho last October at Bellator 230, and Nemkov rose to the occasion to submit the Brazilian in the second round to defeat his third former champion in a row and book himself a title shot against two-division champ Bader, who had knocked out Nemkov's mentor Emelianenko to add the heavyweight title to his light heavyweight belt.

But once again Nemkov produced a performance worthy of the stage as he stunned Bader with a head kick, then followed up with a sustained barrage of ground strikes to finish "Darth" and capture the Bellator light heavyweight title.

The performance has seen Nemkov hailed across the MMA world as one of the world's very best 205-pound fighters, in any promotion.

Now he'll face the challenge of defending the title against the next batch of contenders looking to challenge for his title, including former UFC contender Corey Anderson, who swapped the UFC octagon for the Bellator cage earlier this summer.

Before Nemkov's return to action, check out his spectacular title-winning performance as Russia celebrated its latest big MMA world champion at Bellator 244.