Roman's revolution: Who's next on Abramovich and Lampard's Chelsea transfer wish list? 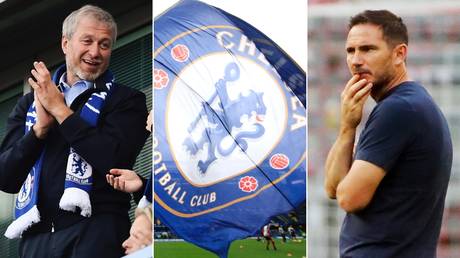 Roman Abramovich has signaled his intentions ahead of the start of the new Premier League season by greenlighting a sensational summer spending spree at Stamford Bridge, but who might be next on boss Frank Lampard's shopping list?

It has been a remarkable summer in West London as, one by one, reinforcements have been added to bolster Lampard's squad ahead of a planned assault on Liverpool's Premier League title reign.

But the real jewel in Chelsea's transfer crown was secured on Friday when German wunderkind Kai Havertz inked a five-year deal with the club, bring closure to one of the summer's most prolonged transfer sagas.

The total cost of these transfers is somewhere north of £200 million ($265 million) but, with a month remaining until the English transfer window slams shut, there is no sign that Abramovich has decided to close his pocketbook. Indeed, several more high-profile targets are understood to be under consideration by the Chelsea hierarchy.

Hindsight, they say, is 20-20, but the decision to release Rice from the Chelsea academy as a 14-year-old could be a mistake that ends up costing Chelsea as much as £60 million ($80 million).

Rice, 21, has developed into one of the finest young defensive-minded players in the Premier League in the three full seasons he has played with West Ham. Lampard is known to be a keen admirer of Rice, who can slot into the center of defense as well as playing a holding role in the middle of the field, and has already made tentative inquiries as to the player's availability.

Rice is understood to be keen to return to Stamford Bridge where he retains several friends from his time in the academy (he is particularly close to Blues midfielder Mason Mount) but has, so far at least, stopped short of attempting to force West Ham's hand by demanding a move.

Financial Fair Play constraints will likely mean that any deal for Rice would have to be funded, at least in part, by the sales of some Chelsea dead wood, but the omens for the move seem positive. The last two young English players Chelsea signed from West Ham worked out just fine: Joe Cole and Lampard himself.

Chelsea's Achilles heel last season wasn't so much a niggling annoyance; it was a glaring, open wound.

54 goals conceded in the Premier League highlighted the fact that all was not well with the Chelsea rearguard. While criticism can and should be levied against the club's central defenders, Spanish goalkeeper Kepa Arrizabalaga has not come close to living up to the reputation as being Chelsea's record transfer.

Kepa was consistently ranked among the worst goalkeepers in the Premier League and was at fault for several goals that cost Chelsea points in the league. Remarkably, he didn't claim even ONE corner kick in the entire Premier League season.

Lampard and Abramovich clearly want to rectify this situation, with giant Senegalese goalkeeper Edouard Mendy of Ligue 1 club Rennes thought to be a chief target.

The 6ft 6in shot-stopper would immediately provide more robust cover under high balls – something which was largely absent last season – as Chelsea aim to re-establish their defensive credentials.

French custodian Maignan is another goalkeeper thought to be under consideration as Chelsea attempt to solve their goalkeeping woes.

Lille has so far rebuffed Chelsea's interest in the 25-year-old Frenchman, with the player thought to be upset at his club's refusal to negotiate with the Premiership powerhouse.

Chelsea's technical advisor (and one of the most decorated goalkeepers in club history) Petr Cech is thought to be overseeing the search for a new stopper and is keen on both Maignan and Mendy, with the latter's association with Rennes, for whom Cech also played, perhaps tipping the balance in his favor.

The 25-year-old Algerian international has become one of the most consistently creative playmakers in the English championship in his spell with Brentford.

A host of Premier League clubs are on alert after he bagged 28 goals in the last two seasons, and he was in particularly impressive form as his team narrowly missed out on promotion to the Premier League for the forthcoming campaign.

Chelsea have been one of a number of clubs considering a move for Benrahma as they look to fill holes created by the departing Willian and Pedro, but it seems that the addition of Ziyech and the outstanding development of United States international Christian Pulisic has cooled the interest at Stamford Bridge.

Still, the price tag for the Algerian isn't thought to be overly-prohibitive and Chelsea could do a lot worse if they are looking to consolidate their squad depth in their attacking positions.

The free transfer addition of Thiago Silva to the heart of the Chelsea defense means that the center-half position isn't quite as flimsy as it was a few months ago, but with the Brazilian turning 36 on his next birthday, it can't be considered much more than a stop-gap solution.

Further defensive reinforcements are clearly required and Chelsea are understood to have retained an interest in Brighton captain Dunk - a player who very much embodies the profile of a typical, hard-tackling English central defender.

Chelsea were rebuked in an approach for Dunk three weeks ago, but the talks aren't thought to have progressed towards any satisfactory conclusion.

It now seems likely that Chelsea will push forward into the season with what they have - but if their defense appears as porous in the opening weeks of the season as it did last year, you can imagine that Chelsea could well fire off a telephone call to the South Coast club as soon as the January transfer window opens.