Put your mask on! Cristiano Ronaldo REPRIMANDED for failing to wear face-covering as he watched Portugal game (VIDEO) 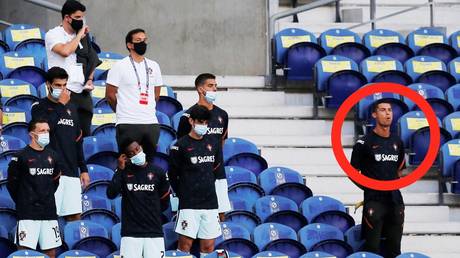 Cristiano Ronaldo had to be reminded of his responsibilities as he watched Portugal's Nations League game with Croatia from the stands on Saturday after a stadium official warned him that he must observe COVID safety protocols.

The Juventus star missed out on the game due to a toe infection which he had likened to a "bee sting," but other medical concerns were on the mind of a stadium employee, who approached the five-time Ballon d'Or winner to remind him of his mandatory obligation to wear the protective covering when he was inside the ground.

He quickly complied with the request, donning a blue medical mask which he had on the seat next to him.

Ronaldo, as well as other officials associated with the Portugal national team, were watching the game while observing social distancing inside FC Porto's Estadio do Dragao stadium. And if the request to wear a mask was a mild annoyance, he certainly won't have been dispirited by Portugal's performance on the pitch.

Ronaldo's teammates ended up 4-1 winners in the fixture, with goals from Joao Cancelo, Diogo Jota, Joao Felix and Andre Silva thoroughly trouncing the World Cup finalists, whose only riposte was a late Bruno Petkovic consolation strike.

It was the ninth win in Portugal's last 10 games, with their form continuing to suggest that Ronaldo and co. are ideally positioned to defend their European Championships crown when the delayed tournament finally kicks off next summer.

Several of Ronaldo's teammates at Juventus – including Blaise Matuidi and Daniele Rugani – were struck down with COVID-19 earlier this year, with Ronaldo understood to have been very concerned at the time about his personal health.

During football's enforced hiatus he encamped himself and his family in his hometown of Madeira for several weeks.

Another of his Juve teammates, Paulo Dybala, also contracted the virus, later telling the media that he developed "strong symptoms" and that he could "hardly breathe".

Face masks, along with other preventative measures such as regular hand-washing, social distancing and limiting social contacts, have been found by scientists as effective means of inhibiting the spread of the virus which has now killed more than 880,000 people across the globe.