'People like Abramovich want to pay it': Kai Havertz 'not expected to train at Bayer' as club 'agrees' €80million move to Chelsea 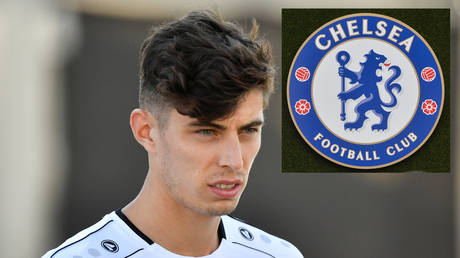 Kai Havertz is no longer expected to train with Bayer Leverkusen according to head coach Peter Bosz as reports emerge of the player completing an initial €80 million to Chelsea as Roman Abramovich's continues his summer spending.

READ MORE: 'The Bank of Roman': Chelsea look SAFE from breach of money rules despite HUGE spending – as Abramovich coughs up $329mn in a YEAR

The Havertz saga is one of the most protracted transfers of the summer as the German forward has been expected to sign with The Blues for some time, and reports suggest the two clubs have finally agreed a 5-year-deal worth £72 million (€80 million)for the 21-year-old, with an extra €20 million in add-ons expected to take the final sum up to €100 million.

Bayer Leverkusen head coach Peter Bosz: “I no longer expect Kai Havertz or Kevin Volland to train with us again.”

Havertz is set to join Chelsea and Volland is due to move to Monaco. #B04 #CFC #ASMonaco

“I no longer expect Kai Havertz or Kevin Volland to train with us again,” said manager Bosz, who is also expected to lose Volland to Monaco.

Chelsea have agreed an €80m fee with Bayer Leverkusen for Kai Havertz, according to the Guardian. The deal also includes an add-on of €10m and another potential add-on of a further €10m, which could take the entire deal to €100m. #CFC #B04

"There are clubs and people, like Roman Abramovich in this case probably, who are able to and want to pay it. They will have calculated it well and Kai is not the only player joining Chelsea this summer."

Former PSG captain Thiago Silva has also joined on a free transfer after becoming a free agent to tighten a leaky defence.

Havertz's deal will make him the most expensive player in Chelsea history, surpassing the club-record £71.6m paid for goalkeeper Kepa Arrizabalaga.