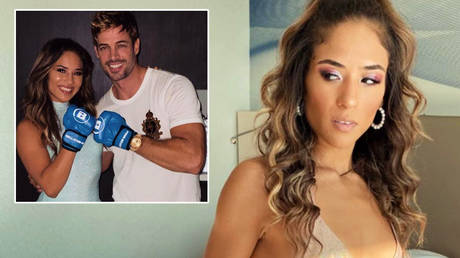 Unbeaten MMA newcomer Valerie Loureda has revealed that she has made up for a car crash and "one of the worst experiences in my life" by buying a Porsche, meeting Hollywood star William Levy and passing 500,000 fans on Instagram.

The 22-year-old flyweight had a memorable month, knocking out bitter rival Tara Graff at Bellator 243 in Connecticut before sarcastically describing herself as "just an Instagram model" in a comeback to her defeated opponent's pre-fight quips.

Hotly-followed Loureda has just passed 500,000 followers on the social media platform, where she chatted with former UFC welterweight champion Tyron Woodley as her account passed the huge number of fans keen to see her posing inside and outside of the ring.

She posed in blue boxing gloves with actor William Levy, who has more than 7.3 million followers, and spoke of her thrill at meeting her fellow Cuban in a Twitter post that also revealed some of the pain she has gone through during a turbulent few weeks.

"I went through one of the worst experiences in my life," she said about an incident she did not elaborate upon from July 29, explaining that she had suffered further misery when she "got hit on the highway" three days later.

Matters began to improve for the better, Loureda said, on August 7, when she ended Graff's challenge in the second round to score the third victory of her career following wins in February and June last year.

"The world watched my overhand and salsa after," she recalled, adding that she celebrated by buying a Porsche on August 25 and meeting Levy at his birthday party on August 30.

"From the worst to most spectacular month ever," Loureda concluded, having promised "big things coming" in her shot with the former model, Dancing with the Stars contestant and collaborator with pop star Jennifer Lopez at his 40th celebration.

July 29- I went through one of the worst experiences in my life, August 1- Got hit on the highway, August 7- The world watched my overhand and salsa after, August 25- I bought a Porsche, August 29- I meet w William Levy. August 30- From the worst to most spectacular month ever🤣

Loureda had teased fans about her meeting with Levy by taking a self-portrait in a car while wearing a short dress, captioning the glamorous photo: "Guess who I'm going to meet?"

She posed with Levy's partner, Mexican-American actress Elizabeth Gutiérrez, next to a dimly-lit pool, ending an eventful few days in style.

Earlier in the week, Loureda invited fans to "grab a drink" with her while turning her back to the camera in a pink dress, following the snap with a selfie in a bikini in which she described herself as the "collagen queen".

The ex-ballerina had insisted that she did not "do anything for social media" ahead of her grudge match with Graff, when she was accused of attracting "disgusting, already mysogynstic dudes" and targeting "male followers and stripteases" by UFC bantamweight Macy Chiasson.

"I do things for myself," responded Loureda. "The way that I market myself is not for social media and it’s not for men.

“It’s not for social media. I am the way that I look like, but I’m also a fighter. It’s just jealousy and [critics are] not educated in that aspect.

"They’ve never seen it before and they can’t handle it. But they will when they see me fight in the cage.”