Khamzat Chimaev DROPS UFC heavyweight Alexander Gustafsson in training – but was it a low blow? (VIDEO) 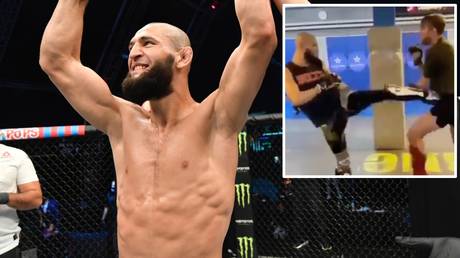 Ahead of two potential UFC fights in the next two months, Khamzat Chimaev has been testing his mettle in the training room and appears to have sent former UFC title challenger Alex Gustafsson tumbling in newly released footage.

There is an old adage in the fight game which states that what happens in the gym, stays in the gym – but perhaps that doesn't apply to the growing legend of Khamzat Chimaev.

Chechen-born Swede Chimaev significantly enhanced his reputation with two wins in the span of 10 days on "Fight Island" this summer, absorbing a total of TWO strikes in a pair of dominant wins against John Phillips and Rhys McKee.

In advance of a proposed two more fights in the next couple of months, 'Borz' has been adding some tricks to his arsenal at his training base at the Allstars gym in Stockholm - as evidenced by footage of him sparring with former two-time light heavyweight title contender and current UFC heavyweight Alexander Gustafsson.

I’d say nut shot usually there’s a little delay with the liver too but could be wrong pic.twitter.com/QX34oCxCZb

A debate has formed amongst MMA fans as to whether the kick which sent Gustafsson to the mat was a low blow, or if it was in fact a pinpoint strike to the liver - both of which are extremely uncomfortable, but one is obviously an illegal shot.

Current UFC lightweight Stevie Ray had his say in the comment thread, suggesting that the brief delay between the strike landing and Gustafsson dropping to the canvas suggests that it was a liver strike - but this is likely something that can only be confirmed by the Swedish fighter himself.

As for Chimaev, his next Octagon assignment is set to come in the United States for the first time on September 19 against experienced veteran Gerald Meerschaert - with a second bout set to swiftly follow on 'Fight Island' against another veteran, submission specialist Demian Maia.

He's not leaving the cage physically able to fight in October. https://t.co/S3uAjlAVmi

"We’re working on a fight for him here, it’s still being worked. But we’re talking about him and Demian Maia on 'Fight Island'."

Neither of these fights have yet been officially confirmed by the promotion, but if Chimaev can wrack up another couple of wins within a few weeks of each other it is clear that the UFC's welterweight division will have a new title contender.