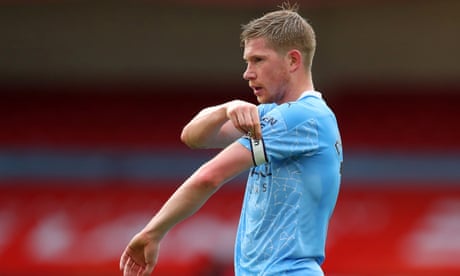 Kevin De Bruyne has revealed that he is in talks with Manchester City over extending his contract, with the Belgium midfielder currently representing himself in the negotiations after his former agent was arrested in August.

De Bruyne was part of the Belgium side that defeated England in the Nations League on Sunday and was asked about his contract situation at City before the match. The 28-year-old admitted that negotiations over an extension to his current deal, which expires in 2023, have started but admitted that he has been operating without an agent since the arrest of his former representative Patrick De Koster on suspicion of money laundering, use of false documents and forgery.