'Jorge Masvidal beware! You are next!': Michel Pereira sets sights on 'BMF' belt after another ACROBATIC UFC win (VIDEO) 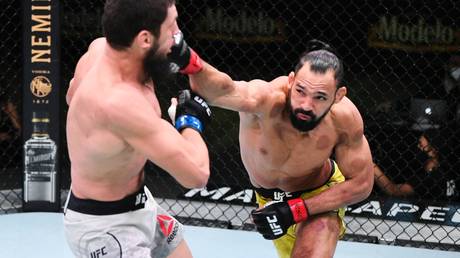 After another dazzling performance in the Octagon on Saturday night, high-flying Brazilian UFC sensation Michel Pereira has become the latest fighter to take aim at Jorge Masvidal and his 'Bad Motherf*cker' belt.

Pereira, whose entry into the UFC was propelled by a viral video of his acrobatic style of fighting in early 2019, turned in a typically entertaining performance as he submitted Russia's Zelim Imadaev seconds from the end of the final round in Las Vegas.

The prelude to the finish displayed Pereira at his most exuberant: jumping knees, kicks off the cage, as well as Nate Diaz-style slaps and even Conor McGregor's infamous hands-behind-the-back taunt.

The 27-year-old fighter is no carnival act, though, with the end of the fight – a suplex into a rear-naked choke submission – emphasizing both his talent and his fondness for the spectacular.

An exclamation point to a stellar night - @UFCPereira, take a bow 👏

And with the win, Pereira called for an uptick in competition - with one man in particular in his firing line.

"Dana White, Sean Shelby, I want the ‘BMF’ belt," he said in his post-fight interview.

"Jorge Masvidal beware! You are next!

"I came to give the show that I said I was going to give," Pereira said.

"I was ready for wherever that fight was going to go. I dance the way the music plays."