'It was intense': Serena Williams battles past Sloane Stephens at US Open to keep Grand Slam record hopes alive (VIDEO) 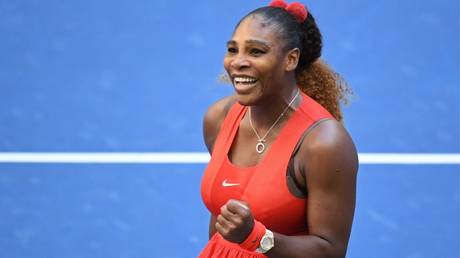 Serena Williams battled back from a set down to defeat Sloane Stephens and keep her hopes alive of capturing a record-equalling 14th Grand Slam title.

Williams had a nightmare start in the opening set as she made an uncharacteristic 13 unforced errors as Stephens took the set 6-2.

But after a wobbly start, Williams composed herself and turned up the power in the second set to draw level, before talking herself through the deciding set by pumping herself up between points.

"It was intense, I have to say," Williams said during her on-court interview after the match.

"It always brings out the best in my fitness when I play Sloane.

"My thing is just try to stay calm and be more serene. I just knew it was important for me just to keep trying, just to keep going."

And, speaking to reporters after the match, she explained that she hoped she impressed the one fan that was allowed to watch the match – her three-year-old daughter Olympia.

"I don’t think she was paying attention, between you and me," she grinned.

"She may have been playing with some princesses upstairs!"

In the next round Williams will face Greek Maria Sakkari, who knocked her out of the Western & Southern Open just 10 days ago, and she explained that being the big name in the field comes with a lot of pressure, with the entire field seemingly putting her in their sights.

"Sometimes it's harder than others," she explained.

"Every day having 'Serena' on your back is a massive target for the tour, for press, for stress.

"But as Billie Jean King said, pressure is a privilege. So I wouldn't want it any other way. So I just try to think about how fortunate I am to have been in this position."