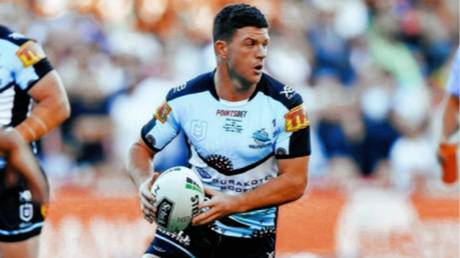 Chad Townsend, a rugby league player for Cronulla-Sutherland Sharks, is facing a spell on the sidelines after a vicious shoulder charge earned him a controversial red card in a recent game against the Newcastle Knights.

Townsend, who was playing for the first time in five weeks after overcoming injury, was issued with his marching orders by referee Ben Cummins during his side's 38-10 defeat after launching himself shoulder-first into Knights fullback Kalyn Ponga.

The "tackle" violated the rules of the game which dictate that he wrap his arms around his opponent, who was sent flying backward in the collision - with some reports saying that Ponga lost a tooth in the incident.

Players from both teams became involved in an altercation immediately afterward, with fans inside the stadium also erupting.

"Townsend's got himself set 10 meters away, then whooshka!" ex-pro Steve Roach said in commentary.

🤔Was it send off worthy?🤔

Gal and Sterlo add to the debate surrounding Chad Townsend.

Ponga, though, very much had the last laugh as his time wound up winner upon the final whistle - with the player scoring his first NRL hat-trick in the game.

"I was on the ground and he was above me that's how it unfolded," he said after the game.

"It was sweet, he got my body and I sort of just fell back."

The game was marred by a serious of similar incidents, with the Sharks' Tony Rudolf also sanctioned for what was described as a 'suplex' type of tackle.

Townsend now faces a three-week suspension after being red-carded, a ban which could be increased to five weeks if he unsuccessfully attempts to overturn the charge.