'I am a young player with a lot to learn': Phil Foden breaks silence after England's quarantine breach scandal 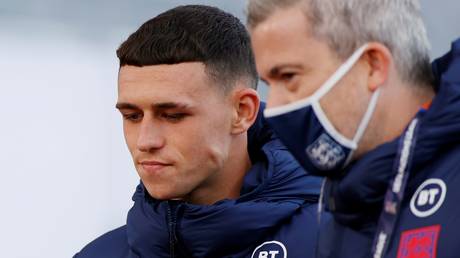 Manchester City youngster Phil Foden has issued a "full apology" after he and Mason Greenwood were kicked out of Gareth Southgate's England squad for breaking quarantine rules by bringing women into the team hotel in Iceland.

Foden, along with Manchester United teenager Greenwood, were captured in Snapchat footage released online which appeared to show evidence that they had invited women into their hotel room.

It prompted Southgate to remove the pair from the England squad ahead of the upcoming game with Denmark for failing to observe COVID-19 safety protocols.

The 20-year-old star, who is poised for an increased role in Pep Guardiola's Manchester City midfield after David Silva departed the club at the end of the season, has released a statement in which he acknowledges the mistake and says that he still has "a lot to learn."

"Following the story which has emerged today regarding my actions in Iceland, I want to make a full apology," Foden said.

"I apologize to Gareth Southgate, to my England team-mates, to the staff, supporters and also to my Club and my family.

"When I was called up by Gareth for these games, my first reaction was that of immense pride. To pull on that shirt for the senior team in my England debut was an incredible privilege.

"I am a young player with a lot to learn, but I am aware of the huge responsibility I have in representing Manchester City and England at this level.

"On this occasion, I made a poor decision and my behavior didn't meet the standards expected of me. I breached COVID-19 protocols put in place to protect myself and my England colleagues. As a consequence, I will now miss the opportunity to travel to Denmark with the squad, and that hurts.

"I will learn a valuable lesson from this error in judgment and I wish Gareth and the team good luck this week."

The actions of the two players, who both won their first full international caps in the 1-0 win in Reykjavik, came in contrast to the 'bubble' imposed upon the squad which prevented them from seeing even their own family members.

Earlier on Monday Southgate blasted his two players, saying the actions of both had been "naive".

"It is a very serious situation and we have treated it that way," Southgate said.

"They have been naive and we have dealt with it appropriately. I recognize their age, but of course, the whole world is dealing with this pandemic and there is a responsibility on all ages that they do their part."