Does the Mbappe-Giroud ‘rift’ hint at deeper problems in the French camp ahead of Euro 2020? 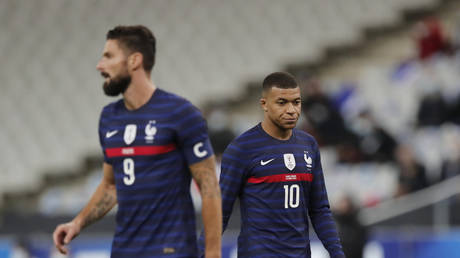 World Champions France are among the favorites to win this summer's European Championships but are rumors of tensions within the camp threatening to overshadow Didier Deschamps' team's pursuit of further silverware?

France enter this summer's delayed tournament, which kicks off on Friday with a game between Italy and Turkey, with a galaxy of stars at their disposal but while the likes of Raphael Varane, N'Golo Kante and Paul Pogba look set to impress, reports of bickering between the team's star-studded list of forwards threatens to impose a black cloud on their preparations ahead of their first match with Germany next week.

Signs that all wasn't well in the French camp became clear on Tuesday when Deschamps' men left it late to score a 3-0 win against Bulgaria thanks to a late brace from Chelsea striker Olivier Giroud.

Olivier Giroud attempted to make up with Kylian Mbappé in training today, but the PSG man chose to keep the tension up instead, according to RMC. https://t.co/cJW1YgdVu4

Speaking to the media afterwards, Giroud - who is second in France's all-time top scorer list - hinted that they could have made lighter work of their outmatched opposition if some of his teammates were a little less selfish with the ball, with speculation suggesting that Giroud's gripe was with Paris Saint-Germain star Kylian Mbappe.

"I was a little quiet because, sometimes, I make runs and the balls aren’t forthcoming," said Giroud after the Bulgaria win. "I am not saying that I always make the best runs, but I am seeking to offer solutions in the box."

Giroud remains an integral part of Deschamps' team but the French boss has reportedly moved to try and quell any disharmony in the group, with the supposedly furious Mbappe also said to have been talked out of holding a press conference in which he wanted to air his grievances with the Chelsea man.

According to further reports, Giroud attempted to draw a line through the matter by apologizing to Mbappe on Thursday - but the PSG striker is said to have rebuffed Giroud's peacemaking efforts and remained in "moany" mood.

The issue between Giroud and Mbappe isn't the only internal squabble currently simmering in the French squad. Karim Benzema, returning to the squad this summer after a years-long hiatus, had also engaged in a run-in with Giroud after he described his colleague as being a "go-kart driver" in comparison to Benzema's "F1" car.

Giroud light-heartedly referenced the comments several days ago, saying that he would celebrate with his teammates on a go-kart track if France are successful this summer.

The issue prompted Deschamps to ensure that Giroud and Benzema were to sit beside one another during team meetings and events in a bid to bolster camaraderie and team spirit - but the French boss may well have to dip even further into his peacemaking box of tricks if he is to heal the rift which could threaten to overshadow their attempts to win the European Championships for the first time in more than 20 years.