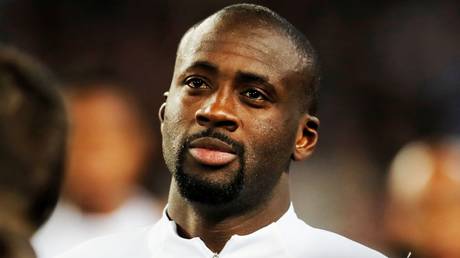 Toure, 37, allegedly boasted to other players taking part in the charity event that he could arrange for the sex workers to arrive at the team hotel in Chesire, reports UK tabloid The Sun, as well as posted an x-rated video of a naked woman in a bath to the team's WhatsApp group.

The move is said to have appalled Toure's teammates, many of whom are celebrities as well as being former professional players, forcing the organizers of the match to expel the former Ivory Coast international from the event.

"Everyone at Soccer Aid was disgusted by Yaya’s messages," The Sun quoted a source as saying.

"There is a WhatsApp group for his team, the World XI, and everyone had been chatting in it.

"Without being prompted, Yaya posted a video of a naked woman in a bath. She was acting in a lewd manner and it was highly inappropriate.

"He went on to say he could get 19 women like the one in the video to come to the hotel to the pleasure of those playing the match. It was absolutely disgraceful and caused a huge amount of distress to some of the people who received the messages.

"Soccer Aid is a charity game and is raising money for children.

"So to have one of the players, especially one who is supposed to be a professional, making such lewd and gross suggestions is despicable."

The WhatsApp group that Toure is alleged to have sent the lewd video to includes former France international Patrice Evra, as well as female players Julie Fleeting, Lianne Sanderson and Chelcee Grimes - with a wave of complaints to Soccer Aid bosses coming shortly thereafter.

"Julie, Lianne and Chelcee made their feelings clear about how wrong they thought his messages were. They called for Toure to be taken off the team," the source added.

Toure apologized to the team the following morning but it was decided soon after that the most appropriate course of action was for him to withdraw from the game.

"Inappropriate content was shared in a private group text. The message was quickly deleted and a full apology was made to all," a Soccer Aid spokesperson said of the incident.

"Soccer Aid for Unicef has discussed the above with the individual involved and he has decided to no longer continue to participate in this year’s event.

"While it was an error of judgment, it was felt that the behaviour didn’t align with the values of the event and its cause, and it was the right thing for him to step back from this year’s match."

The Soccer Aid charity football series has been in place for 14 years, with this year's match raising funds for people affected by coronavirus around the world.