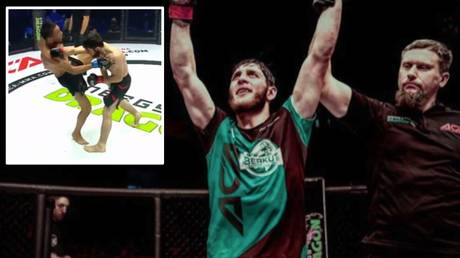 Lined up against Kyrgyzstan's Zhorabek Tesheboev, Zulaev faced a prospect with an identical 7-0 record to his own.

And as the fight progressed, the pair served up a thrilling, back-and-forth encounter. But the action came to a spectacular end early in the third and final round of their featherweight matchup as the pair both loaded up in an attempt to score a late knockout.

Teshaboev launched into a jumping knee attempt, but was met by a perfectly-timed overhand right by Zulaev that connected flush on Teshaboev's chin, knocking him out instantly.

It was a stunning knockout that left ACA commentators Bryan Lacey and Brad "One Punch" Pickett open-mouthed as Zulaev scored one of the most spectacular knockouts of the year.

Zulaev moves his undefeated career on to 8-0 and, with five of those wins coming by way of knockout, it's clear to see that anyone looking to take the Russian prospect's unbeaten record will do so at their own risk.