Blame the kids: Bologna boss Sinisa Mihajlovic says he thinks he caught COVID-19 from his CHILDREN after missing pre-season camp 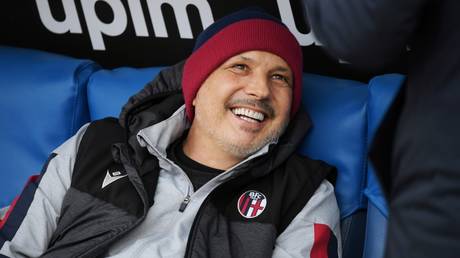 Bologna coach Sinisa Mihajlovic has stated that he thinks he contracted COVID-19 from his children after being forced to miss his side's pre-season training camp for the second year in a row.

Mihajlovic was forced out of pre-season training last year after being diagnosed with leukaemia in July 2019, and has been left on the sidelines once again after testing positive for the deadly coronavirus.

Mihajlovic explained that he remained asymptomatic and stressed that he had not personally put himself at any risk of contracting the virus.

"I did nothing that I wasn't allowed to do, I always behaved well and I was disappointed about many criticisms that were aimed at me and my family," he said in a video to his team and fans on Saturday.

"I followed the rules, I did everything a person is allowed to do while on holiday. Unfortunately, it happened – the discos were open and my children were going, and it is possible that I was infected from one of my children.

"For the second year in a row, I couldn't make the training camp and that's what stung me the most."

The 51-year-old former Yugoslavia international, said earlier this summer that he had made a full recovery from leukaemia. But now he has to remain in quarantine while he fights off COVID-19 before he can return to the training pitches of Bologna once again.