Barcelona may have won the contract battle but, make no mistake, Lionel Messi will win the war 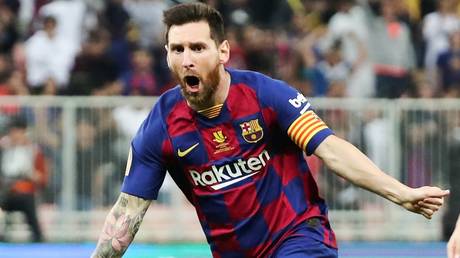 The furor over Barcelona superstar Lionel Messi's attempted departure from the Camp Nou may have reached a temporary agreement, but the Catalan club is unlikely to benefit from keeping their wantaway star around.

Messi cut a disconsolate, demoralized figure as he and his Barcelona teammates capitulated in humiliating fashion to Bayern Munich in the UEFA Champions League, and it wasn't long until the rumor mill carried stories of Messi's unhappiness at the club.

Barca dispensed with beleaguered head coach Quique Setien, but that was never going to be enough to appease Messi, who reportedly became increasingly frustrated with how the club was being run.

Finally, the rumors became cold-hard news as reports of Messi's demands to leave became public. That, it seemed, was the line in the sand for the Argentinian. It didn't feel like a negotiating tactic, nor was it a petulant explosion of frustration. This was a player, who has carried the expectation of one of the world's biggest football clubs on his shoulders for years, deciding that enough was enough.

However, Team Messi's plans for a smooth exit from Barcelona were dealt a blow when La Liga upheld the club's contract, meaning that the stated June 10 deadline for a departure request was set in stone, despite the Spanish football season being significantly delayed by the COVID-19 pandemic.

Despite more public declarations of his intention to leave, Messi finally stood down and agreed to stay at the club, but his comments were anything but conciliatory as he took aim at club president Josep Maria Bartomeu for a perceived failure to keep his word.

"I wasn't happy and I wanted to leave," the player told Goal.com.

"I have not been allowed this in any way and I will stay at the club so as not to get into a legal dispute. The management of the club led by Bartomeu is a disaster.

“I'll continue at Barcelona and my attitude won't change, no matter how much I have wanted to go.

“I told the club, the president, that I wanted to go. I've been telling him all year. I thought my time in Barcelona was over, sadly - I always wanted to finish my career here.

"It was a very difficult year, I suffered a lot in training, in games and in the dressing room. The president always said that at the end of the season I could decide if I wanted to go or if I wanted to stay and in the end he did not end up keeping his word."

While he may have referenced stated his initial wish to finish his career at the Camp Nou, it seems the dynamic between him and Bartomeu is irreparable and, given the fact that Messi and his team believed they were able to leave this off-season, they may already have had conversations, official or otherwise, with potential suitors.

Paris Saint-Germain would offer a huge contract and a much softer domestic schedule, while Inter Milan would provide the chance for Messi to play in a league that may suit his style of play.

But the prospect of Messi linking up with the man who got the best out of him at Barca, Pep Guardiola, at Manchester City was the option that captured the imagination of fans in England and beyond. It seemed City were in pole position to sign him, but when La Liga upheld Barca's contract language, that free transfer move was scuppered.

Now Messi faces the prospect of an unhappy year at the Camp Nou, at a club he's grown tired of, under a regime he seemingly has little respect for and with a team that is set to undergo a rebuild under new head coach Ronald Koeman, with Messi's strike partner Luis Suarez on the verge of a move to Serie A giants Juventus.

With their star man now seemingly staying under protest, it seems unlikely that Barcelona and Messi will reconcile enough to get the best out of him in 2020/21, so perhaps a rethink is necessary.

The Argentinian's contract states that he cannot leave unless the club receives a bid of 700 million Euros, but if the club wanted to help Koeman, avoid dressing-room unrest and move on a disinterested star, it may be prudent to actively entertain offers for Messi before his contract expires next summer.

Let the market determine the price, then squeeze every bit of cash out of the buying club to minimize the damage of losing their star man, who will almost certainly take the option to walk away for free next summer.

It would mean Koeman could rebuild the team with his own signings, and not have to take over the club with the black cloud of a sulking superstar in his ranks.

But, while that course of action may prove the most sensible for Barca in the current climate, one thing is clear. Barcelona have lost Messi. One of the greatest players in the club's history seems set to go. It seems certain that Messi will ultimately get his wish and get his move (even if it's next summer), but now it's down to damage limitation for Barca, who may have won the contractual battle this off-season, but they certainly haven't won the war.