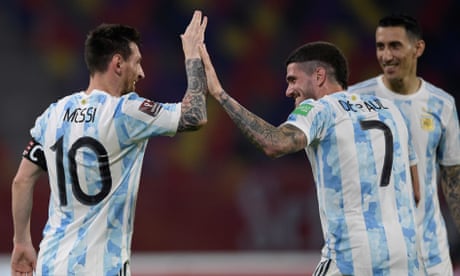 The Udinese midfielder discusses Brazil rather than Argentina hosting the Copa América, his future and being a ‘spare tyre’

Rodrigo de Paul had imagined it, but not like this. “We had gone years without playing a Copa América in our country and we had the chance to live that,” he says. “We know the passion Argentinians feel. We knew stadiums would have been bursting. We knew that every team that came to play wouldn’t just be facing us but 60,000 or 70,000 people shouting. We saw it in Brazil two years ago it was like they played with an extra man. This year was our turn, with us it was going to be even more powerful, but …”

But Argentina are heading back to Brazil. The Copa América was supposed to begin at the Monumental in Buenos Aires on 12 June 2020. Instead, it begins at the Mané Garrincha in Brasília this Sunday; De Paul and his Argentina teammates start the following night against Chile in Rio. Delayed a year, the competition was lost by co-hosts Colombia amid political unrest on 20 May. Ten days later, Argentina relinquished, too, because of the coronavirus crisis. The day after, the 2019 hosts stepped in, if not exactly willingly.