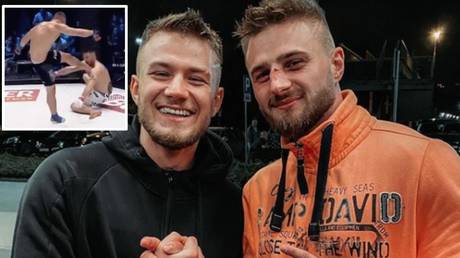 Polish welterweight fighter Amadeusz Roslik snatched a DQ defeat from the jaws of victory after he was disqualified for landing a thunderous soccer kick on his opponent during an MMA event in Poland on Saturday night.

Roslik threw the illegal socer kick after knocking opponent Adrian Polanski to the canvas with an expertly timed overhand right during the Fame MMA 7 event in Warsaw, prompting the cageside officials to disqualify him moments after he celebrated what he thought was a win in the Polish capital.

The unified rules of mixed martial arts declare that a fighter is considered "grounded" if his hands or knees are making contact with the mat, meaning that knees or kicks to the head are outlawed in that position.

However, in the heat of battle it appears that Roslik disregarded this particular rule, costing him what would have been the second win of his professional career.

The kick harks back to the halcyon days of legendary Japanese MMA organization PRIDE, in which soccer kicks such as this were part of the accepted ruleset.

They have long since been forbidden by most major mixed martial arts promotions but are still considered legal in Japanese organization RIZIN - which was founded by former PRIDE chief Nobuyuki Sakakibara.

"Did he yell 'PRIDE never die'?" wrote one fan online of the incident, while another commented that the kick was just "a little bit illegal".

Either way, Roslik will presumably now be more acquainted with the conduct expected of him in the cage - with the DQ loss on his career record being a permanent reminder of his moment of hot-headedness on Saturday night.

But, remarkably, there was no bad blood after the fight as the pair posed for a good-natured post-fight pic.