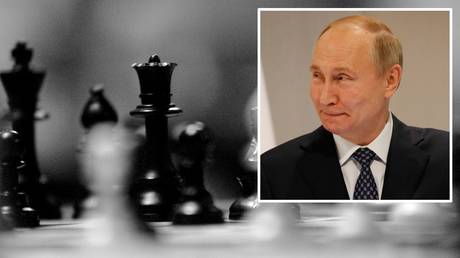 Russian President Vladimir Putin has sent a message of congratulations to the Russian chess team after they claimed gold in the World Chess Online Olympiad.

With the COVID-19 pandemic making in-person play problematic, the tournament – which was originally set to take place in Moscow between August 6-17 –was changed to an online-only competition, as Russia surged into Sunday's final against India.

Russia went on to defeat the Indian team 3 : 3, 4.5 : 1.5 in the final, but due to technical issues that saw two Indian players run out of time due to internet issues, an appeal was lodged.

After considering the situation, president of the International Chess Federation Arkady Dvorovich decided to award both teams gold medals.

Russia's success in the first online Olympiad in chess history drew high praise from President Putin, who posted a congratulatory letter to the team via the Kremlin website.

"Dear friends! Congratulations on your triumph at the first FIDE Online World Chess Olympiad," he wrote.

"Our team has rightfully achieved a bright, impressive victory. This success became possible thanks to each of you, your talent, character, excellent preparation and truly team unity. And of course, I would like to especially note the effective, tangible support that the coaches, the Russian Chess Federation and numerous fans have provided to you.

"I wish you new sports achievements and all the best."