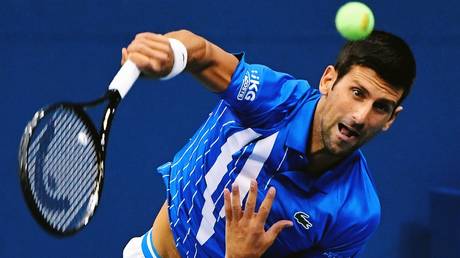 Djokovic defeated Struff with relative ease, 6-3, 6-3, 6-1 as he claimed the fifth win against the German in five career meetings. Indeed, such has been Djokovic's dominance in the head-to-head, Struff has managed to claim just one set against him throughout those five clashes.

But the ease of Djokovic's victory suggested that he's looking in ominously good form as he moves his way through the tournament field to claim a landmark 600th career win in hard-court competition.

"It was a very, very good performance from my side," Djokovic said after his victory.

"I managed to read his serve well. Made one necessary break in the first set, I faced one or two break points in the opening game.

"Obviously the trajectory of the match can go differently if you lose your serve against a big guy like Struff, who serves really well and has a very aggressive, powerful game from the back of the court," said the Serb, who is looking for an 18th Grand Slam title.

"But I moved well and after the first set, the second and third was a really great feeling on the court."

The US Open field was decimated before a ball had even been served, with a host of players, including Rafael Nadal and Roger Federer, opting not to play in the tournament due to concerns over safety protocols amid the COVID-19 pandemic.

It has meant the strength in depth of the field has been affected and that, along with the results already in the tournament, has left Djokovic and 2014 US Open champion Marin Cilic as the only two players left in the men's draw who have a Grand Slam tournament to their name.

Djokovic's next test will see him take on Spanish No. 20 seed Pablo Carreno Busta on Sunday, with the Serb a huge favorite to progress to the latter stages of the tournament.