Julian Assange extradition hearing: Why justice must not only be done, but be ‘seen’ to be done – literally 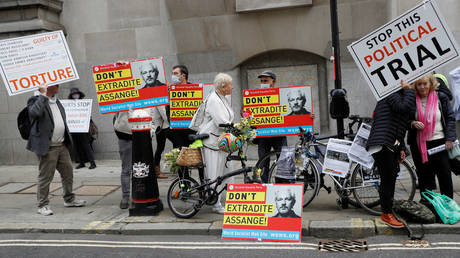 The denial of remote access to the newly resumed Assange extradition hearing of 40 civil society and political monitors has been strongly criticized given the importance of the case, and it’s easy to see why people are concerned.

“It is not merely of some importance, but is of fundamental importance that Justice should not only be done, but should manifestly and undoubtedly be seen to be done,” Lord Chief Justice Hewart’s famous dictum  goes.

Sadly that’s not the case – literally – with the extradition hearing of Julian Assange which resumed today in London. Amnesty International and Reporters Sans Frontieres were just two of the 40 civil society and political monitoring groups who have had their remote access to the hearings denied, having, it is claimed, been invited to apply for such access only last week.

With the problems of coming to the UK at this time due to Coronavirus restrictions, and only limited room in the gallery (where Assange’s father watched proceedings), remote access was more important than ever. But the authorities seem to think differently.

We can confirm that the entire list of 40 civil society and political monitors have had their remote access to the #Assange hearings withdrawn, after being invited to register for access last week. This includes Parliamentarians and NGOs.

The group Bridges4Media said that a letter from the UK Ministry of Justice had cited District Judge Baraitser’s concern about “maintaining the integrity of the court” given that images of February’s hearing appeared on social media.

Rules about court reporting are strict, and woe betide those who fall foul of them and are found guilty of causing interference with the administration of justice. But given the enormous political ramifications of the cases, it is surely questionable that monitoring groups are not able to watch proceedings online. In fact you could argue that given the importance of the case, proceedings should be on live television for everyone to watch.

Amnesty, for one, are routinely allowed remote access in human rights cases, but not here. Again, his supporters will say that Assange is being singled out for special treatment, and that this has been the case all along.

Take the presumption of innocence, a fundamental principle of a just society.  Assange was accused of rape but no charges were ever brought (they were eventually dropped altogether). But that didn’t stop a whole range of  ‘Inside the Tent’ commenters referring to him, quite libelously, as a ‘rapist’. Ironically, a large number of these commenters who publicly traduced Assange would probably regard themselves as ‘liberals.’ But here they were promoting a very serious allegation, as a legally established fact. Assange wasn’t so much considered guilty as charged but guilty as accused. No one who believes in justice could support that.

Before Monday’s hearing in London, Assange was re-arrested on a new indictment, issued in June by the US government – which contains 18 new charges, including him plotting to hack computers, and to obtain and disclose national defence information. Assange’s QC complained that the latest indictment had been made at the ‘11th hour’ without warning, but his objections were overruled by DJ Baraitser. A request for a further adjournment by the defence, to prepare for the new charges, was also rejected, with Baraitser saying that she had previously offered this to Assange’s lawyers, only for it to be declined.

Assange has now spent 16 months in the high-security Belmarsh prison. Consider this. Also in Belmarsh at the same time as Julian was a man named Sudesh Amman. In November 2018 Amman had been sentenced to three-and-a-half years in jail for possessing documents containing terrorist information and for disseminating terrorist publications. Amman seemed to be obsessed with carrying out a knife attack. While Assange was still languishing inside, the IS-supporting Amman was released from Belmarsh on January 23, 2020.  Guess what happened next? Entirely predictably, a few days after being given his freedom, Amman went on a stabbing spree, along Streatham High Street. He stabbed and injured two people (one seriously) before being shot dead by the police.

Who posed the bigger threat to the general public:  Amman or Assange? Clearly it was Amman.  Yet he was released, while Assange’s ordeal continues. Let us hope –and pray– that justice is done and, just as importantly, we can see it being done.