Are dark forces really to blame? So many people believing in conspiracy theories like QAnon reveals a sad truth about the West 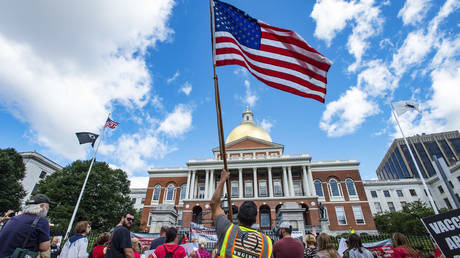 We need to talk about these lunatic claims that see sinister hands at work everywhere. Not because they're true, but because of what they demonstrate about our society and the quest for meaning in the age of Covid.

It’s easy to simply dismiss QAnon as deranged. It began in 2017, on the notoriously foul online message board 4chan, when an anonymous user, ‘Q’, posted that Hillary Clinton was about to be arrested. What prompted ‘Q’s’ post was a quip President Donald Trump made during a press conference about a “calm before the storm.” Q’s theory was that a cabal of Satan-worshiping, child-trafficking pedophiles and cannibals, led by Hillary Clinton and others, sought to dominate the world and were plotting against President Trump. ‘Q’ claimed that Trump’s press conference revealed that, at some appointed time in the near future, Trump would unleash ‘The Storm’, destroy the conspiracy, and thus restore America to greatness.

Undaunted by the notable absence of Trump’s ‘Storm’, ‘Q’, and many others have built upon this ridiculousness, which has morphed into an “uber-conspiracy” theory related to Trump and the elections. The posts, which have moved from 4chan on to numerous social media platforms, have attracted thousands of followers.

But it has not been confined simply to those social media platforms. Some QAnon believers have led coordinated harassment campaigns against journalists, rival online communities, celebrities, and liberal politicians. Others have shown up at Trump rallies wearing ‘Q’-themed merchandise. The president has retweeted Twitter accounts related to ‘Q’ or conspiracy theories dozens of times. How aware Trump is of what ‘Q’ is, beyond a movement that supports his presidency on the internet, is unknown.

But its presence on- and off-line has become more and more apparent. The New York Times reports that there have been multiple incidents of real-life violence linked to QAnon supporters. Controversial polls suggest there is a difference in the numbers of Republicans and Democrats who believe in QAnon’s claims. How accurate or otherwise these polls are is open to debate. But what is not in debate is the winning of the Republican congressional primary run-off in Georgia, in a strong Republican district, by Marjorie Taylor Greene, an openly avowed believer in QAnon. She will almost certainly be elected to the House of Representatives in November.

Greene’s victory is just the latest expression of how QAnon is becoming mainstream. The use of the internet and social media platforms explains how the message has spread. But the more important question is, why?

Historically, conspiracy theories were mostly influential on the margins of society. However, since the turn of the 21st century, conspiratorial thinking has gone mainstream. The idea that “something fishy” is going on, that we are being manipulated by some unseen force, now transcends the political divide. Whether it’s the Iraq War, vaccinations, child abuse or other moral panics, the idea that dark forces behind the scenes are at play has become accepted as an incontrovertible truth by both left and right.

The questioning of governments and experts is an inherently good thing. It is the bedrock of accountability and an aspiration for better outcomes. But the rise of conspiratorial thinking, particularly around Covid-19, which QAnon has thrived upon, suggests that a lack of trust in officialdom and expertise – indeed, in the authority of science and knowledge – is now endemic in society.

In the face of uncertainty and catastrophe, people are yearning for explanations as to what lies behind unwelcome developments. But their quest is for meaning, not facts, for some notion of control over random uncertainty. And that’s why the content of QAnon is less relevant than the motivation and drive behind the phenomenon.

Conspiracy theories were, in the past, a kind of resource through which powerless and uneducated people tried to gain an understanding of the forces that seemed to control their lives. They offered some explanation for the unknown. Most importantly, they offered the fearful a story that promised them a semblance of understanding over events, something to lash onto in the storm.

The sad truth of Western society today is that conspiracy theories are no longer confined to the powerless and uneducated. Now, the educated sections of society, including the elites, have developed a disposition whereby they see the world through the same lens. Just think of Brexit, the election of Trump, the rise of populist political parties in Europe. All the recent disruptions have been put down to shady external interventions, from Russia to Cambridge Analytica to social media manipulation.

The space QAnon occupies is neither the result of its obscurantist fantasising nor its analytic precision. QAnon has simply filled the vacuum left by those elites.

The rapid disintegration of the old assumptions, conventions and practices that were rooted in the Enlightenment and which served as an explanatory framework for interpreting events and dealing with uncertainty have all been sacrificed on the altar of identitarian politics and cancel culture.

The elites’ loss of confidence about how to deal with uncertainty means the narrative of “hidden agencies” and “dark forces” is now a pillar of elite culture itself. The resulting conspiratorial imagination views everyone not as the author of their destiny, but as an object of manipulative, secretive forces. The flourishing of this imagination in recent years has been driven by the elites’ own difficulty in putting forward an authoritative account of events.

The perception that our behavior and action is controlled by external agents is symptomatic of a heightened sense of fatalism, which arises from today’s sense of diminished subjectivity. The feeling of being subject to manipulation and external control – the very stuff of conspiracy theory – springs from the contemporary perception of powerlessness that is felt right across society.

The rise of QAnon represents an impoverishment of intellectual discourse and the denigration of public life. For all their bluster – and, indeed, in some cases, violent action – QAnon is promoting a sense of powerlessness. Being active on social media is, in fact, an act of passive resignation, a non-involved act of watching while unaccountable, unreachable and fundamentally unknowable forces stitch up political life. Worst of all, despite claiming to be anti-establishment, it side-steps confronting the political elites and lets them off the hook.

QAnon is not only anti-reason, it is also anti-democratic. This is not political activism, but political cynicism. It thrives on a seemingly thrilling, but ultimately pacifying, sense of outrage against the wicked people who supposedly run everything behind the scenes.

The rise of QAnon in America shows the extent to which American citizens are being transformed into victims. Yesterday’s agents of change are today’s bewildered observers of secret crimes and corruption. QAnon’s ‘truths’ only shroud everything in obfuscation. They are normalising hearsay, backwardness and lies, suggesting there is nothing we can really do to change the world or even our own lives.

Despite the elites’ loss of belief in their own mission, QAnon is, in reality, their hidden friend, not their enemy. Because the rise of QAnon means the status quo ante remains intact – but at a huge price for the future.