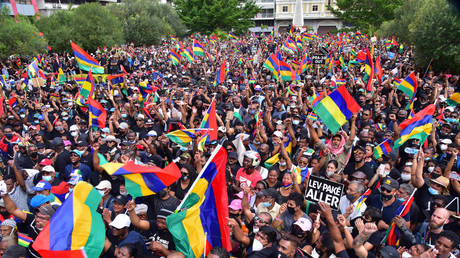 Tens of thousands of Mauritians took to the streets of the capital to call for the resignation of Prime Minister Pravind Jugnauth and his cabinet for their botched handling of an oil spill which threatens the country’s economy.

An estimated 75,000 people took to the streets of the capital Saint Louis over the weekend, the country's largest anti-government protests in decades, following a slow and lackluster response to an oil spill in early August.

The Japanese bulk carrier MV Wakashio struck a reef in southeast Mauritius and spilled roughly 1,000 tons of oil into the pristine Indian Ocean waters offshore the island. A 15 kilometer (9 mile) stretch of the coastline is now stained with oil as volunteers attempt to halt the spread of the slick.

Environmental volunteers have erected makeshift oil barriers to stem the spread while experts from Japan and Britain are investigating the extent of the spill and its potential impact on the local flora and fauna, which include major mangrove forests filled with endangered species of animal.

Meanwhile, some 34 melon-headed whales were found dead or seriously ill near the spill while the carcasses of roughly 40 dolphins are being examined for traces of oil in their system which may have contributed to their sudden and untimely deaths.

The threat to wildlife sparked outrage across the small island nation though an autopsy of two of the dead animals found no traces of oil.

Protesters bore signs which read, “Your incompetence is destroying our island,” “You have no shame,” and “I've seen better Cabinets at IKEA” after the prime minister blamed bad weather for the botched clean up response.

Experts are warning that the economic impact on the Mauritian economy, which is largely dependent on tourism, could be felt for decades.