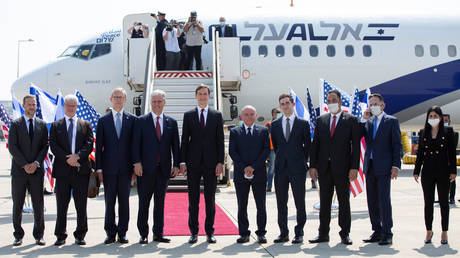 A joint US-Israeli delegation has made the first-ever direct commercial flight between Tel Aviv and Abu Dhabi. Days earlier, the UAE canceled a law banning any dealings with Israel.

The senior officials flew on a plane of Israel’s flag carrier, El Al to further the normalization deal, which was signed by Israel and the UAE earlier this month with the US as an intermediary.

Earlier on Saturday, the UAE nullified a decades-old law prohibiting any form of cooperation with Israel and its citizens. A boycott of the Jewish state was in place there ever since the UAE’s creation as a federation of monarchies in the early 1970s

Saudi Arabia allowed the plane to fly through its airspace, marking its approval of the normalization deal. The UAE is the third Arab country after Egypt and Jordan, and the only Gulf monarchy, to establish formal diplomatic ties with Israel. Saudi Arabia has its own policies on boycotting Israel. Regular flights between Israel and the UAE will require Saudi clearance to use its airspace to be commercially viable.

Relations between Israel and the Gulf nations, including the UAE, have been growing increasingly cooperative over the years, with mutual hostility towards Iran playing a crucial part for the rapprochement. The deal that formalized the new reality was met with anger in some Arab nations like Turkey, which accused the UAE of betraying the Palestinian people for selfish interests.

The agreement said Israel would halt the annexation of occupied Palestinian lands, a move vocally advocated by the government of Prime Minister Benjamin Netanyahu. The PM, however, said that his annexation plans have not been changed by the deal.