Ruins with a view: plan to turn Scottish castles into enchanting hotels 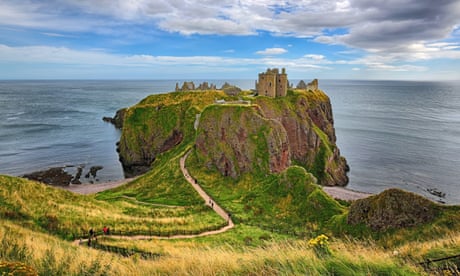 Just outside Stonehaven in Aberdeenshire, on the side of a steep cliff overlooking the North Sea, sits Dunnottar castle. Once a medieval fortress, the picturesque ruins are open to the public for days out but have not boasted overnight visitors since the likes of Mary Queen of Scots and her son James VI in the 16th century. Now, under new proposals to be debated at the Scottish National party conference next weekend, Dunnottar could become one of a number of Scottish castles to be transformed into high-end but affordable hotels.

The plan is based on the model of Spain’s paradores, government-run historically significant buildings such as churches, castles and stately homes, often in areas underserved by tourism. They have existed in Spain since 1928 and include iconic sites such as Parador de Santiago de Compostela, which began life in 1499 as a hospital for pilgrims travelling to Santiago and is considered to be the oldest hotel in the world. Today, Spain has nearly 100 paradores, including fortresses, convents, monasteries and even a former prison and asylum. In 2019, they generated a turnover of €261m (£230m) for the country’s economy.