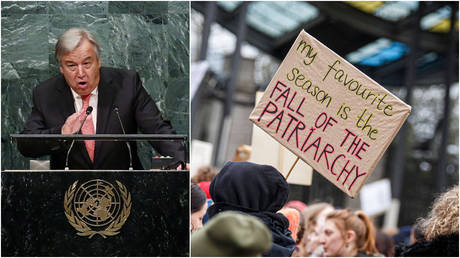 The United Nations has come under fire for pushing a political “agenda” after the agency’s social media managers shared a quote from Secretary-General Antonio Guterres connecting the coronavirus pandemic with “patriarchy.”

Guterres delivered the opening remarks at a virtual town hall event with women’s civil society organizations late last month. While his lengthy speech hit on a number of complex issues – including disparities in the healthcare workforce, gender-based violence and protections for workers in the informal economy – the UN’s social media account chose to elevate a remark about “patriarchy,” citing it in a tweet.

“The Covid-19 pandemic is demonstrating what we all know: millennia of patriarchy have resulted in a male-dominated world with a male-dominated culture which damages everyone – women, men, girls and boys,” the UN tweeted last weekend, quoting a passage from Guterres’ speech.

The #COVID19 pandemic is demonstrating what we all know: millennia of patriarchy have resulted in a male-dominated world with a male-dominated culture which damages everyone – women, men, girls & boys.

The post soon set off a swarm of criticism, as outraged netizens interpreted the UN chief to be blaming men for the health crisis and running with a ‘woke’ left-wing buzzword.

“Why is United Nations spouting political woke-ism about patriarchy?” asked former UK Brexit Party MEP James Wells. “UK should review the hundreds of millions it gives UN if this is its agenda? ‘If it wasn't for those pesky white heterosexual males.’”

The lengths that people and organizations will go to in order to appease illogical Leftists is astonishing. https://t.co/SpgwJO1ZDm

I knew the @UN would use Covid-19 to push an anti-life, anti-American, pro-Marxist agenda — but blaming Covid on the "patriarchy," is blatantly absurd to anyone with an intellect that hasn’t been completely obliterated by leftism. We’re undergoing a revolution of stupidity. https://t.co/iIQrVPo057

defund the UN, defund the WHO, patriarchy didn't cause the pandemic, you fools https://t.co/sw3v6RjuDl

Though Guterres at no point claimed men were responsible for the pandemic, he argued that Covid-19 had “deepened” existing gender inequalities, saying that while women are generally at lower risk from the virus, “they are suffering because of the redirection of health funding and services.”

“It is simply counter-productive, for example, to deprioritize maternal and reproductive health services,” Guterres said. “Maternal mortality fell by nearly 40 percent between 2000 and 2017; we cannot backtrack now, but there are signs that rates are rising again due to the pandemic, particularly in countries in crisis.”

Nonetheless, many critics could not forgive the “patriarchy” line, calling on Guterres to “lead by example” and resign to allow a female to take his place as UN chief, striking a blow against male domination.

Since you are the ninth man to hold the position of UN Secretary-General since its creation, have you considered stepping aside in favour of a woman?

Secretary-General Guterres could resign, declaring that it's time for the first woman in that role. But will he? https://t.co/BoyGzJ6cqn

I am waiting for Mr Guterres (I assume a male) to resign and offer his role to a women. Lead by example my man, or else you are just signaling.