Pope Francis warns there’s a ‘plague WORSE than Covid’... and that is ‘gossip’ 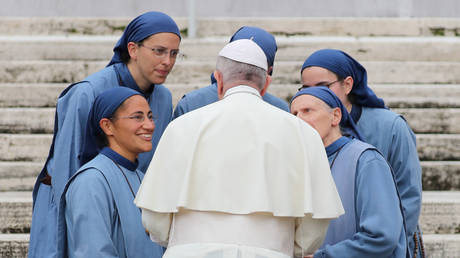 A “plague worse than Covid” is threatening to divide the Roman Catholic Church, the pontiff has said, urging the faithful to abstain from “gossiping” and warning against airing all their grievances in public.

Delivering his weekly blessing on Sunday, Pope Francis seemingly strayed away from the topic and yet again warned against “gossiping” within church communities and among the top church bureaucracy.

“Please brothers and sisters, let’s try to not gossip,” the pontiff urged. “Gossip is a plague worse than Covid. Worse. Let’s make a big effort: no gossiping!”

While the Pope did not provide any figures, the gossiping “plague” is likely affecting significantly more people than the dreaded coronavirus. Worldwide, some 26 million Covid-19 cases have been registered, including more than 880,000 deaths.

If “something goes wrong” one should offer “silence and prayer” to those who made a “mistake” instead of bringing the matter public, Francis said, warning that the devil is ultimately the “biggest gossiper.”

“The devil is the great gossip. He is always saying bad things about others because he is the liar who tries to split the Church,” the Pope continued.

His remarks came as he commented on a gospel about the need to correct others privately if they do something wrong, and to bring the matter to the “community” only if the person refuses to straighten up. The Roman Catholic Church has long relied on such a “fraternal correction” concept among its hierarchs, without making internal church affairs public.

Still, critics of the church have repeatedly argued against it, asserting that such a policy only fostered the commission of sin within the church, including child abuse.