Over half of New Delhi has been infected with Covid-19, Indian govt study suggests 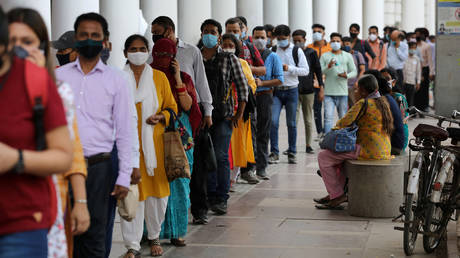 More than half of New Delhi's population of 20 million has been infected with the coronavirus and since developed antibodies, a survey by the Indian government has revealed.

The fifth and largest research study undertaken in India's capital was based on 28,000 samples which showed that 56.13 percent of New Delhi's residents had Covid-19 antibodies, Satyendar Jain, Dehli health minister, said. New Delhi is a territory within Delhi.

The figures mean that "Delhi has largely won over Covid," Jain wrote on Twitter. However, he warned that it was too early for the public to let down their guard.

In the fifth sero survey done in the national capital of Delhi, antibodies have been detected in 56.13 % of population.

This was the largest survey being done by the Delhi Govt.

Delhi has largely won over COVID, though we should continue to practice covid appropriate behaviour. pic.twitter.com/0fvDqCvvg6

"We should not get into discussions over herd immunity," the minister said at a press conference. "Only experts will be able to give a clear picture."

Everybody should keep wearing face masks, sanitize their hands and follow other health rules, he insisted.

The World Health Organization (WHO) believes that at least 60 to 70 percent of the global population must have Covid-19 antibodies before herd immunity can develop.

Another survey by the diagnostics company Thyrocare Technologies has shown that 55 percent of people in India had been infected with the virus, the firm told Reuters last week.

India has registered more than 10.8 million cases of the coronavirus since the start of the pandemic – the second-worst number after the US. But on Tuesday the country's reported rates of daily infections and deaths fell to eight-month lows, with 8,635 cases and 94 fatalities in the past 24 hours.

The Indian government is also undertaking what it calls the world's largest vaccination campaign. Some 4 million people have received Covid-19 jabs since mid-January and there are plans to immunize over 300 million.