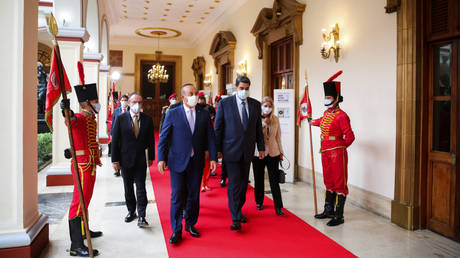 Venezuelan President Nicolas Maduro has announced pardons for 110 opposition lawmakers currently facing charges, saying this should promote democracy in the country currently under US sanctions and demands for regime change.

The intent of the pardons is to “promote national reconciliation and the search for peace,” Information Minister Jorge Rodriguez announced on Monday in Caracas.

The measure was proposed by the Commission for Truth, Justice and Peace and seeks to strengthen democracy and “open channels of political action” within the framework of the Venezuelan Constitution, Rodriguez added.

The government in Caracas is calling for national unity to face the “criminal blockade” by the US and the Covid-19 pandemic, urging the opposition to seek peaceful coexistence through “constitutional, electoral and peaceful ways.”

Among the pardoned lawmakers are Freddy Guevara, Freddy Superlano, Tomas Guanipa, Miguel Pizarro, Americo de Grazia, Simon Calzadilla and Henry Ramos Allup, who had been stripped of parliamentary immunity. The list includes both opposition politicians who had fled Venezuela and those who have been arrested, such as Gilber Caro and Renzo Prieto.

The recipients will be able to participate in the December 6 parliamentary elections if they so choose, Rodriguez added.

Venezuela has been under US sanctions since January 2019, when opposition politician Juan Guaido declared himself “interim president” and denounced Maduro as illegitimate. Though Washington and a number of its allies have recognized Guaido, all of his attempts to seize power in Caracas – including an attempted military coup – have failed.