I pledged what? Serbian President Vucic seems surprised after Trump announces that Belgrade will move embassy to Jerusalem (VIDEO) 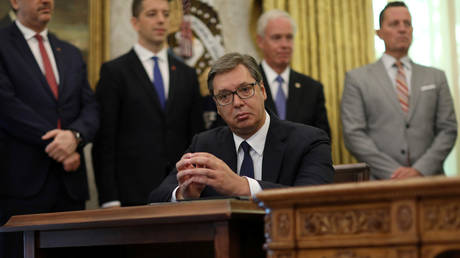 Aleksandar Vucic's reaction to Donald Trump's announcement that Belgrade will move its Israeli embassy to Jerusalem next July made some people wonder if the news had come as a surprise to the Serbian leader.

Vucic visited Washington this week to sign a US-brokered deal with Avdullah Hoti, prime minister of the breakaway Serbian region of Kosovo. The agreement was touted as a great diplomatic success for Washington, which managed to bring the two Balkan rivals closer together. Among other things, Kosovo, a Muslim-majority entity, agreed to recognize Israel while Serbia agreed to move its embassy to Jerusalem, following in the footsteps of the US.

The Serbian president's reaction to the announcement, however, made some commenters wonder whether he knew the details of the document that he had signed. As Trump described the pledge as "fantastic," Vucic looked sideways at his American host, then turned pages of the agreement before making a hand gesture, which one could interpret as an aborted face-palm.

Footage that certainly makes it appear that Vucic did not realize he had agreed to moving the Serbian embassy to Jerusalem — or at least not by July, Trump states. Comedy of errors. pic.twitter.com/0QlzmYM3GY

Comments online suggested Vucic may not have read the fine print before signing the agreement, and called the scene humiliating. Heads will soon roll among the president's aides, some predicted.

Adding to the confusion, Trump mistakenly called Hoti the "president of Kosovo."

The Trump administration first announced plans to recognize Jerusalem as the Israeli capital and move its embassy accordingly in 2017. The move was lauded in Israel, but it angered Palestinians, who said that the US clearly was no longer in a position to serve as a neutral mediator in the Arab-Israeli conflict. A handful of other nations have since vowed to move their embassies in Jerusalem, including Guatemala, Honduras and Malawi.