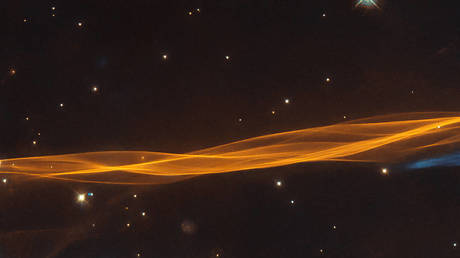 The Hubble Space Telescope has beamed back countless breathtaking photos over the course of its 30-year mission. The latest example is an incredible image of a supernova blast wave that was around 2,600 light-years from Earth.

The powerful star explosion took place in the constellation Cygnus the Swan as a dying star was obliterated. The star was around 20 times more massive than our Sun and its devastating death likely occurred between 10,000 and 20,000 years ago.

The beautiful photo shows just a small portion of the blast wave that remains in the wake of the astonishing astronomical event. In the millenia since the supernova the remnant has expanded 60 light-years from its center.

Interestingly the remnant continues to expand at the impressive speed of 350 kilometers per second. As the star shrapnel from the explosion mixes with low-density interstellar material it creates the magnificent veil-like structure captured in the photo.

Way back in 1991 Hubble captured another image of the Cygnus supernova blast wave, capturing a tiny section of the remnant.