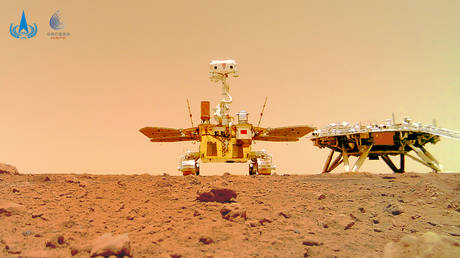 Images released by China’s space agency have captured Mars’ red, flat and rock-covered surface in detail, along with the rover and landing platform that touched down on the Martian surface last month.

A series of high-resolution images published on the China National Space Administration’s (CNSA) website on Friday show the terrain of the red planet in color (and it does look red), as well as the landing platform and the Zhurong rover, the CNSA said.

The picture above shows the Martian surface, which appears relatively flat, with rocks of different sizes scattered everywhere. They have smooth edges, are a lighter color than the terrain and are semi-buried, the CNSA says. There is a ring pit at the far end of the image, with darker, angular stones and a few sand dunes further away.

The next picture, showing the landing platform, was taken when the Mars rover moved away from the platform by about six meters. The lander displays the Chinese flag and the outlines of the mascots for the 2022 Beijing Winter Olympics and Paralympics.

China's Tianwen-1 mission, consisting of an orbiter, a landing platform and a rover, was launched last July. The lander, which carried the rover, touched down in Utopia Planitia, a vast plain in the northern hemisphere of Mars, on May 15. The Zhurong rover drove down from its landing platform to the Martian surface on May 22, starting its exploration of the Red Planet. It has been surveying the area for 28 Martian days (a Martian day is approximately 40 minutes longer than a day on Earth). The rover is surveying the Martian surface and looking for signs of water or ice that could help us understand whether there was ever life on Mars.

This is the latest batch of images released by the CNSA since the orbiter’s landing.

Four days after the touchdown this photo was taken by the front obstacle avoidance camera of the rover showing the ramp mechanism the terrain and the horizon.

The picture above was also taken on May 19 by a navigation camera facing the rear of the rover. It shows the rover’s solar wing and antenna.

The picture taken on May 22 by a rear obstacle avoidance camera shows that the rover had safely left the landing platform, reached the surface of Mars and begun to explore.

The Zhurong rover is named after the god of fire in ancient Chinese mythology, while the name of the mission, Tianwen, means ‘Questions to heaven’, the CNSA explains.

During its expected lifespan of at least 90 Martian days (about three months on Earth) Zhurong will take high-resolution, three-dimensional images of the Martian landscape and analyze the composition of the planet's surface. The orbiter, with a lifespan of one Martian year (about 687 days on Earth), circles around the planet providing communication with the rover and sending the information to the scientists on Earth.

China is the second country in the world after the US to land and operate a rover on the Martian surface.