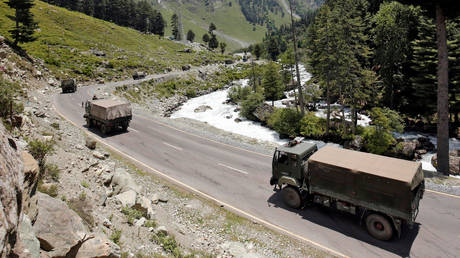 Beijing has reported a new border incident with India in the contested region of Aksai Chin, accusing New Delhi of intrusion into Chinese territory on Monday. China’s military warned it was getting ready for any possible scenario.

The official urged India to withdraw its troops from the Chinese-controlled area and “control” them to avoid such incidents in the future. The Chinese military is taking all measures necessary to deal with the situation and is ready to defend China's sovereignty, he warned.

The statement came within hours of New Delhi bringing an earlier border incident to light, accusing China of conducting “provocative military movements” in the area and crossing the border at the weekend.

The two countries have long been at odds over the disputed border in the scarcely-populated mountainous region known as Aksai Chin in China and Eastern Ladakh in India. The dispute has repeatedly resulted in clashes between Indian and Chinese troops stationed in the area.

The latest serious escalation in the region occurred back in June, when rival troops became involved in a violent and deadly brawl. According to media reports, the soldiers used crude homemade weaponry to assault each other, as they do not carry firearms in accordance with an agreement between the two countries.

The Indian military later admitted that at least 20 soldiers died in the clash and blamed the incident on China. Beijing, for its part, accused New Delhi of provoking the incident, yet remained tight-lipped on its own casualties.