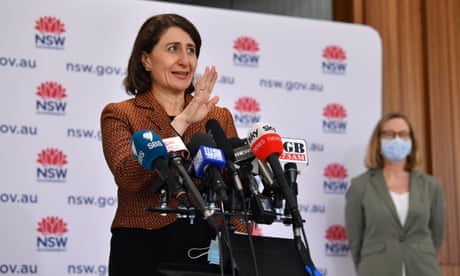 Just 107 of Victoria’s new cases linked to known outbreaks; WA border could stay closed until 2022; Gladys Berejiklian expected to unveil plans to end lockdown in NSW; Scott Morrison hints at home quarantine by the end of the year for stranded expats – follow the latest updates live

The real contrast here is between the Australian people, who’ve made sacrifices, who have looked after each other and showed magnificent resilience during this pandemic and a government that always blames someone else, always has excuses, is always full of hubris in the beginning and when it all goes wrong, says it has nothing to do with them.

They were responsible for the supply of vaccines and the truth is, we have been last in the developed world when it comes to making sure that our vaccination rates were at a point whereby we weren’t suffering from the lockdowns that Australians are currently enduring.

Here is the opposition leader Anthony Albanese on the Pfizer email controversy:

This time last year, the prime minister was saying we’re at the front of the queue. They were his words. He wasn’t saying “We’re last because other countries have had different impact of Covid”, he was saying we were first.

The truth is, you can’t say that and at the same time say that “It’s OK that we were last because of our geography” and a range of other factors and the sacrifices made by Australians who have been magnificent during this pandemic.