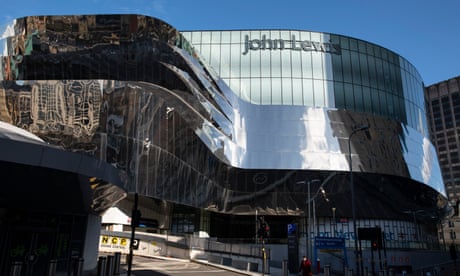 When Andy Street wants to show off the best of Birmingham to visitors up from London, the Conservative mayor of the West Midlands starts his tour in Centenary Square, a public space the length of two football pitches. To the west stands the International Convention Centre (ICC) and the Symphony Hall; to the north, the Birmingham Rep theatre and the new Library of Birmingham; HSBC’s new UK headquarters lies to the south, while to the east – where Street marches off – is a £700m development optimistically named Paradise. The square and its surroundings, Street claims, is “a statement that this place has refound its self-confidence”.

Perhaps it is. But the buildings that surround the square tell another story of a modern city. The ICC was sold off by the council five years ago to help cover the cost of a £1.1bn equal pay bill after thousands of women had been paid less than men for doing similar jobs. The Birmingham Rep is currently closed and 40% of the staff are likely to lose their jobs. The Library of Birmingham cost £188m, which the city couldn’t afford – and led to cuts in opening times, staff and books at libraries across the city and even the shiny new centrepiece itself. HSBC is supposed to bring 2,200 people into the city centre every day but, since Covid-19, the proportion of staff coming in, Street estimates, is around 35%. He is confident that, once Paradise is complete, the new office blocks will be full and the restaurants busy, but pinning one’s economic hopes on city-centre jobs feels optimistic in the midst of a pandemic.